Both pitchRx and openWAR scrape Gameday data, but are quite different in their implementation. This post will help expose those differences and show how to combine them to make 1 + 1 > 2.

Both openWAR and pitchRx can obtain so-called “play-by-play” Gameday data, but provide it in a different format. One reason for this difference is due to pitchRx’s agnostic approach to the type of analysis you’d like to perform. It simply returns data in a collection of tables that closely resembles the raw form. On the other hand, openWAR returns the play-by-play data in a format which is convenient for computing openWAR estimates. Fortunately, I think this format is quite useful for a wide variety of problems and enhances a PITCHf/x database created using pitchRx.

On a side note, the data format returned by openWAR::getData could be produced from tables returned by scrape, but it’s not easy (the ‘atbat’, ‘runner’, ‘action’, ‘hip’, and ‘player’ tables collectively contain the same info). So, in effect, it does not add new data to a pitchRx database, but it can dramatically simplify certain queries (e.g. searching for PITCHf/x by catcher, shortstop, center fielder, etc). Before “Adding openWAR data to your PITCHf/x database” (the last section below), I’ll explain in detail how to acquire play-by-play data for a particular set of games since both pitchRx and openWAR have this capability. Along the way, we’ll also learn how to merge openWAR’s play-by-play data with pitchRx pitch-by-pitch data.

Just like pitchRx::scrape, openWAR::getData can acquire data from any set of games using MLBAM’s gameday identifiers. pitchRx comes prepackaged will all the available game identifiers which we can use to query a specific set of games over an extended period of time. To understand how this works, let’s take a look at the format of these identifiers.

All the ids have the general form ‘gid_YYYY_MM_DD_xxxaaa_yyybbb_1’. The ‘gid_’ part of this identifier is the only part that does not change from game to game. Most identifiers will end with ’_1’, but only if it is not the second game of a doubleheader. The ‘YYYY’, ‘MM’ and ‘DD’ parts are numeric representations of the year, month and day (respectively). The ‘xxx’ part is an abbreviation for the away team name and the ‘aaa’ part is an abbreviation of the away team’s league. The same goes for the ‘yyybbb’ part except this abbreviation is for the home team. As you can see from the output above, some of these identifiers correspond to preseason games (the regular season doesn’t usually begin until the start of April).

Regular expressions are useful for extracting a particular set of gameday identifiers since they allows us to search for patterns in a set of strings. For instance, this regular expression would match every Twins home game in 2013:

For those not familiar with regular expressions, the [0-9]{2} bit says “any two numbers may go here” and the [a-z]{6} bit says “any six letters (from the Roman alphabet) may go here”. Remember that gids contains preseason, regular season and postseason games. So, if by “every home game” we really meant “every regular season home game”, we can easily restrict to games in April through September (if we change [0-9]+ to 0[4-9] in the month slot).

Now, to use this expression to obtain the relevant gids, we can use the base R function grepl (or grep). grepl returns a logical vector the same length the object it is searching. A particular element of that vector will be TRUE if and only if the regular expression found a match. Thus, we can extract the relevant elements of gids by passing this logical vector to R’s [ operator like so:

Let’s do the same thing for away games so that we have every Twins’s regular season game from 2013.

Not all identifiers are created equal

According to reg.season, the Twin’s played 167 regular season games. This is clearly more than the usual 162 games that we would expect. Just for investigative purposes, I’ll search my PITCHf/x database to find out which of these games were not considered “Final”.

These “Postponed” games would explain the discrepancy between the length of reg.season and the true length of the regular season. Fortunately, both pitchRx::scrape and openWAR::getData are smart enough to “ignore” this issue when collecting play-by-play and/or PITCHf/x data. In fact, if we navigate to the gameday page specific to gid_2013_04_14_nynmlb_minmlb_1, we’ll see that the ‘inning’ directory where play-by-play and PITCHf/x would appear is missing.

At this point, once we have the gameday identifiers of interest, it is very simple to use openWAR::getData and/or pitchRx::scrape to obtain data for these specific games. Just for the sake of not abusing MLBAM’s website, I’ll acquire data from just the first two regular season games.

The data returned by openWAR::getData could be seen as a replacement of sorts to the ‘atbat’ table returned by pitchRx::scrape. Both of them have one atbat per record (meaning the atbat order and gameday identifier columns together form a unique key). Before we merge openWAR’s play-by-play data with pitchRx’s pitch-by-pitch data, we’ll have to clean up a few of the column names. 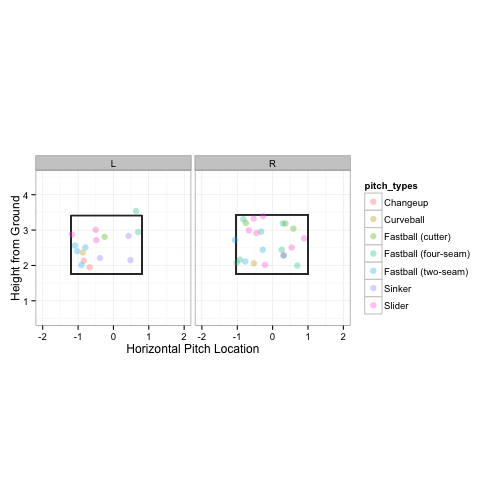 If you have a PITCHf/x database that was obtained using pitchRx, it’s pretty simple to add openWAR’s play-by-play data to your database.

To query your database with your newly added openWAR table, you can follow the principles outlined here (replacing the ‘atbat’ table with the ‘openWAR’ table)