Get your data into memory

Although this table is quite large, it fits into memory on machines with a decent amount of RAM (it takes up about 5 out of the 8GB available on my laptop). In general, having your data in memory can drastically reduce the computational time of operations. Thus, if you can, collect() this table to pull it into R as a data frame.

Now that pa_full is in memory, let’s compute the proportion of NAs (which is R’s way of encoding missing values) for each variable broken down by year.

To plot the proportions, we should transform nas from “wide form” (where each variable has it’s own column) to “long form” (where variable names are stored in a single column). This is a job for tidyr::gather():

For visualization purposes, we’ll also want the ordering of the variables to reflect the overall proportion of NAs.

Thankfully, variables that are mostly missing are that way by design. It’s not very intuitive that away_team_runs, home_team_runs, or score would have missing values, but for some reason, MLBAM programmers decided to populate these variables only when a run was scored during that at-bat/pitch. For modeling purposes, you probably want to replace NA with 0 in these columns, but you may also prefer to have these columns have the running total instead (in that case, you can use this). It makes sense that event2, event2, & event4 are mostly missing since most at-bat outcomes can be adequately summarised with a single event (but some need an additional tag like wild-pitch, error, and/or pick-off). We can also see that Spanish translations of at-bat & pitch descriptions (des_es & atbat_des_es) started in 2012.

The variables that are partially missing (for example, px, pz, etc) are potentially more worrisome since these are the actual PITCHf/x variables. As I’ve pointed out in other posts, it’s important to remember that by default, pitchRx will acquire some non-MLB games played in non-MLB venues. Thus, we have some observations where it wasn’t possible to measure these variables.

To investigate, we essentially perform the same computations as before, but distinguish between regular and non-regular season games. 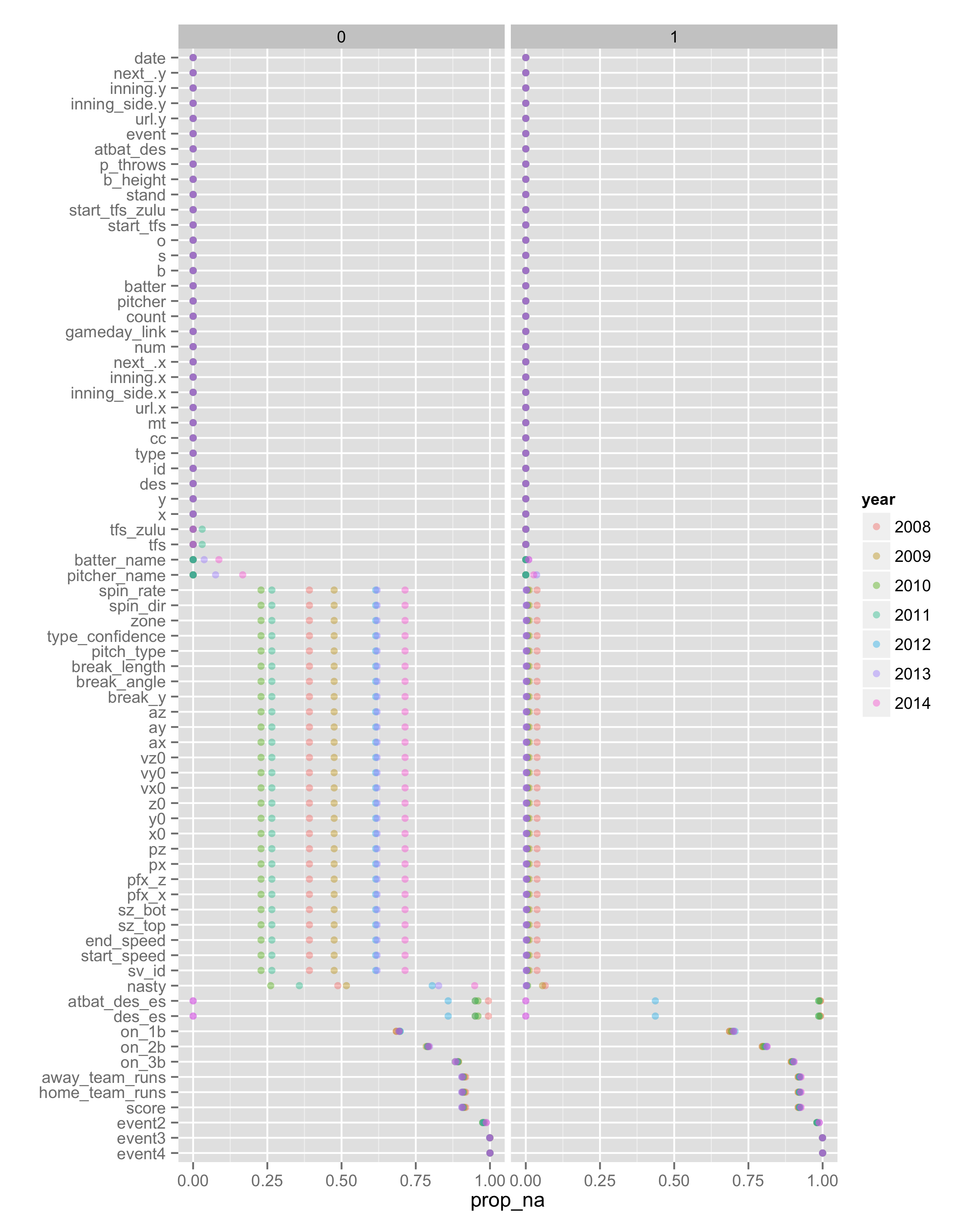 Within the regular season panel (labeled ‘1’) above, there are hardly any missing values for the variables I previously called partially missing. If you look closely in that panel, most of the missing values occur in 2008 when the PITCHf/x system was still being adopted. This means that we can explain the missing values based on what we’ve observed, which is a type of missingness that statisticians refer to as Missing At Random or ignorable. This is a good thing, since this type of missing data can be ignored without it effecting likelihood based models (such as the Generative Additive Models I’ve used to model the probability of a called strike).